Showing posts from January, 2011
Show all

If you're in the mood for a Regency historical that is outside the norm, here are some of the reasons why you should go pick up this book: The hero, Ethan, is an officer in the French Army. He's not spying or pretending. He really believes in the French Revolution (so did Americans if you'll recall). He's the illegitimate son of an English Duke. The Duke is none too happy about his son's chosen profession. And when Ethan turns up as a prisoner of war, the Duke has something he can use to keep Ethan in line.  The heroine, Lottie, is divorced. Her husband cast her off when she had one too many scandalous affairs. At the end of her rope, she decides to go to work in a brothel because she had always liked sex and thought she could be good at being a courtesan. Only it's not quite as easy as she had imagined. If you like the history part of your historicals, there's lots of interesting stuff here about how prisoners of war were treated. It highlights how cla
4 comments
Read more

I sort of quit doing any TBR posts midway through 2010 and I waited until yesterday to decide whether to join in this year. But I really need to work my way through that pile of books sitting in the closet. TBR Day is a good way to jump start that. My thanks to Super Librarian Wendy who is hosting the challenge this year! The very kind Janet W. sent me a small pile of books a while back and this category Western historical was among them. I think it's the only category in my TBR pile that is NOT a Regency. Make of that what you will, LOL. Carolyn Davidson's A Convenient Wife was first published in 2001 as part of a series called "Montana Mavericks." As near as I can tell, there are just over 50 books in the series and they were republished in 2009 for Harlequin's 60th anniversary. Mine has this cover (complete with baby bump): And according to Amazon it is being released in print again Feb. 1. Ellie Mitchum is a naive and sheltered young woman who is
4 comments
Read more 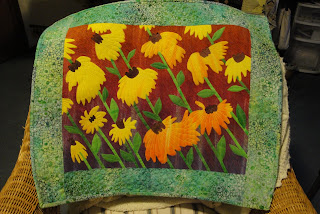 Here's a look at my latest finished project. This is from a class with Frieda Anderson , a gifted teacher and quilt artist who creates beautiful little quilts and does amazing things with color. I learned a new way to fuse fabric and I loved the design. I ended up doing a ton of machine quilting to make the flowers come alive, so I got lots of practice working on that. I love the texture created by the machine quilting. I find myself touching it all the time. If you like this, you really should visit Frieda's site and see the wonderful quilts she has created (click on the gallery link).  Here are some close-ups of the machine quilting:
4 comments
Read more

January 09, 2011
Two of my favorites last month were re-reads. In some respects it was a flat month for reading with the busy-ness of Christmas, traveling, etc., etc. I read a non-fiction book that had me in stitches and I just loved. I'm a fan of ESPN Radio's Mike and Mike in the Morning  and Mike Greenberg wrote a book a few years ago called Why My Wife Thinks I'm an Idiot : the Life and Times of a Sportscaster Dad . He writes about becoming a father and it was a fun read. That book actually came out 3 or 4 years ago. 5. Sold to a Laird by Karen Ranney . This was a "phave" back in November of '09 . Here's what a wrote then (and it was still how I felt when I read it again):  If you've read this blog for any length of time, it's no secret I'm a big Karen Ranney fangirl. I love her work. It's emotional and there's usually a plot twist I never see coming. This book is no different. Lady Sarah is the daughter of an autocratic, ruthless duke. The duke i
6 comments
Read more 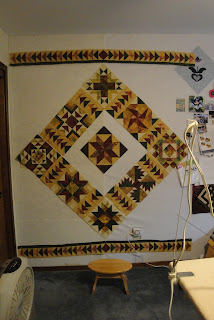 My block of the month project is now 3/4 finished. I've made 8 blocks, 2 rows of sashing, 8 sets of block connectors, and the first part of the center medallion. Tonight I sewed some of the blocks and connectors together. Then I put it all up on my design wall: I believe that tomorrow I'll receive the fabric and instructions to finish the center medallion and I will be able to sew the whole center unit together. From there the 4 corners and the rest of the border. Still lots of space to fill in to make it look like this: Actually, mine will look slightly different. The shop owner who is running this program made a few fabric substitutions to create more contrast. As a result, I arranged my blocks a little differently to improve the symmetry. But dang! I am totally caught up. Yea me.
3 comments
Read more
More posts