Showing posts from December, 2007
Show all 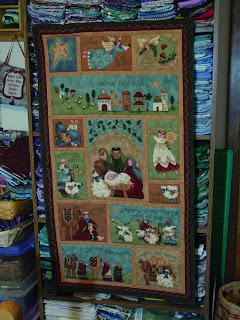 Usually I'm a snob about pre-printed panels, but even I couldn't resist this one. I'm a sucker for anything nativity-related for my Christmas decorating. This panel is by Nancy Halvorsen (who doesn't seem to have her own web site, or else I'd link to it) and there's a whole group of fabrics that go with it. I just bought the panel and straight line quilted around the boxes. Sometime after Christmas when I take it down, I'll quilt around the motifs in the boxes to give it a more textured look, but now it's good enough to hang up for what's left of the holidays. This was a very quick little project and very fun. My panel is flannel and I forgot how much lint it leaves behind in my machine. I'll have to give it a good cleaning on Saturday. I have to take an ornament to a Christmas party Saturday night. I found this free pattern tonight and I'll make it on Saturday. I'll make two. One for the party and one for me!
Post a Comment
Read more 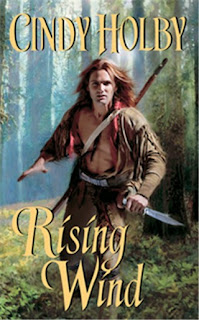 While I love historicals, I admit that I've tended to avoid American historicals and Westerns. I find I'm rather squeamish about the less savory aspects of our history here in the US. Our historical landscape is littered with broken promises and inhumane behavior. On all sides. We human beings are incredibly cruel to one another (one only has to read the daily paper) and there are days when I just don't want to think about it. But extreme circumstances create great tension for an author to use and it can be well worth it to invest in a book like Rising Wind . RW takes place in 1774 when the American Revolution was brewing and colonists were in conflict with several native tribes as the colonists moved further and further west. Connor, a former bondsman sent over from Scotland, and Carrie, daughter of a British officer, meet in Williamsburg and are quickly attracted to one another. They are thrown together as they journey into the frontier to Fort Savannah to meet up with
2 comments
Read more 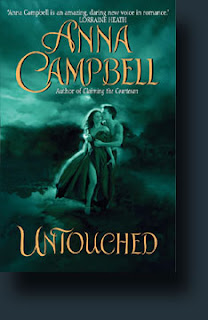 Anna Campbell's first book, Claiming the Courtesan was an unusual, dark, and controversial book. I read it and blogged about it last spring. I found that one to be a compelling, well-written book and I was anxious to read this one. Untouched is a very different book, although dark in its own way. The hero, Matthew (a Marquess) has been held in captivity for 9 years while his uncle/guardian convinced the world that Matthew is insane. Thus the uncle has control over Matthew's considerable fortune and property. Matthew lives in a "cottage" that is on what must be a rather large piece of land, surrounded by an unscalable wall. He lives in relative comfort and is able to maintain a scientific correspondence with the outside world. For reasons that aren't entirely clear (or else I missed the reasons), the uncle decides to procure a prostitute for Matthew. Two stereotypically evil henchmen are sent to Bristol to bring back the prostitute. Instead, they accidentall
4 comments
Read more
More posts